The journey of Pra'. Opening communication channels between citizens and institutions.

Pra’, an ancient municipality of Liguria Region, Italy, 15 km west of Genova, today part of the same city, is known as the “Capital of Basil” and, until few decades ago, had a beautiful, straight, 4 km long light grey sand beach, with important sea bathing, shipwright / ship building and fishing activities. Nevertheless, in the 60’s, the Genova Port Authority, in agreement with Genova City administration, decided to expand the harbour towards west, so on Pra’ territory.

Without any consultation / agreement with the local citizens, and without any written, agreed compensation plan, during over 40 years of construction work the wonderful beach and shoreline was completely devastated and buried to realize a huge container harbour, today the biggest of Italy and one of the biggest of the Mediterranean sea. The construction of Pra’ harbour is one of the largest and more invasive “state-responsibility” environmental disaster in Italy after the second world war, by placing a massive commercial harbor just in front, just in touch, with valuable historical local downtown buildings, churches, several centuries-old villas. The verbal, scam, the promise of 5.000 workplaces in the harbor for the local citizens never materialized, and as today the number of the few local citizens working in the harbour is much less than those working in the past for the bathhouses, hotels, restaurants and shipyard, fishing activities.

The original, cynical, plan of the complete burying of the shoreline was stopped “thanks” to the disastrous flood happened in year 1993, which caused one fatality and heavy damages to the ground floors of countless buildings, food by water and mud, event which made clear that forcing the local rivers into tubes to bury the beach was not a such brilliant idea. Therefore a channel was left between the shoreline and the harbour, at least over 2/3 of the length of the original beach. 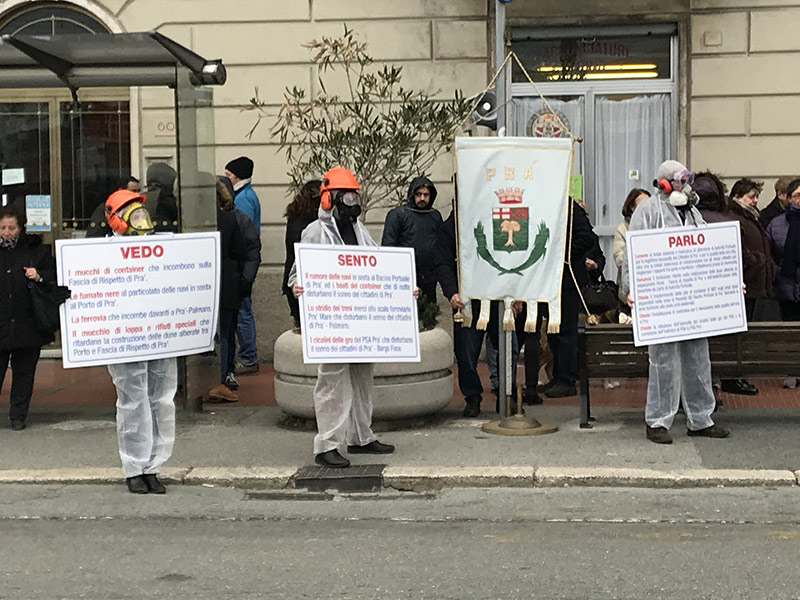 The flood as well “woke up” the local citizens, who until that time stayed just “at the window” looking passively at all that harbor chaos and environmental devastations. Their strong protests made it possible to modify the harbor design and to obtain the channel and, beside it, a buffer zone, a “Fascia di Rispetto”, with a swimming pool, a football field, a rowing regatta field and long cyclo-pedestrian paths. Anyway, that huge space was left mostly in an abandoned, run-down, situation for over a decade, with the old, decommissioned, railway track site with its ruined walls acting as a barrier between the downtown and the new buffer zone. 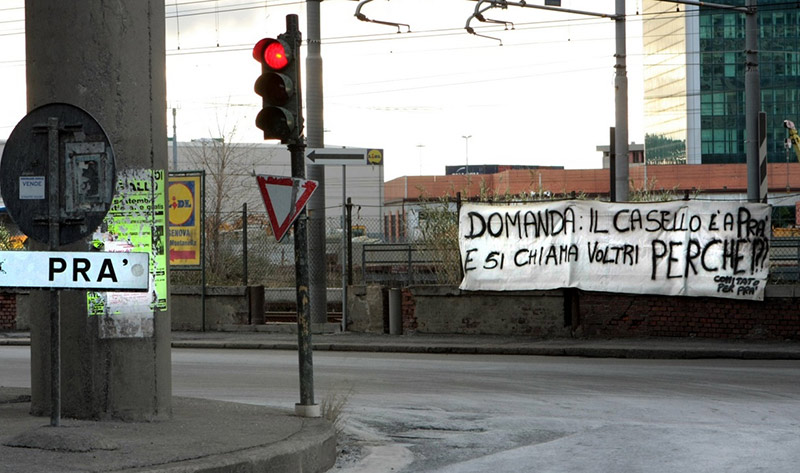 In the meantime, the locally elected political representatives of the District of Pra’ were canceled by the Genova administration to create a wider district, again without any consultation / agreement with the people. Due to the missing of local representatives, a citizen city committee, the “Comitato per Pra’” in 2007 was founded and started a several years of protest campaign, with claiming banners hung along the railway walls, claiming parades, and heavily criticizing local authorities. Those actions, anyway, even if right and sacred, moreover supported by a new-born local newspaper Il Praino, didn’t substantially achieved the expected results, because the protests became a kind of “normal” situation, without nearly anybody, in Genova administration, 15 km + far away, really listening nor making the “extra mile” to fix the issues.

To get out of that unpleasant situation, in year 2014 “PRimA’vera” foundation was created by a group of local citizens having had important experiences in business and administration, at national and international levels, with the target to mobilize the town all around the common scope of transforming the “holy protest” to proposals and real actions. To change the trend and to “design the future Pra’, to get as nice as in the past, even in a different way”. The Foundation adopted completely new ways of working, implementing different tools than previous committees and spontaneous citizen groups, stopping street protests and contestations and starting a direct dialogue with the local authorities, with the companies operating in the harbour of Pra’, and with anybody who could help and give a hand.

Showing respect for all but at the same time firmly asking for solutions, creating projects, drawings, rendering views mobilizing and using local citizens skills, talents work and professional experiences. Same as the popular Italian “Ritz” pretzels, “sweet one side and salted the other side” the Foundation organized countless meetings and conferences with authorities representatives, thanksgiving events one side, but as well, the other side, when needed, going for “protest mail bombings”, “popular petitions”, “See-Hear-Speak” trio street shows, which reveals to be very powerful for image and media impact with very small efforts compared to the nearly useless “mass protests” of the previous years. 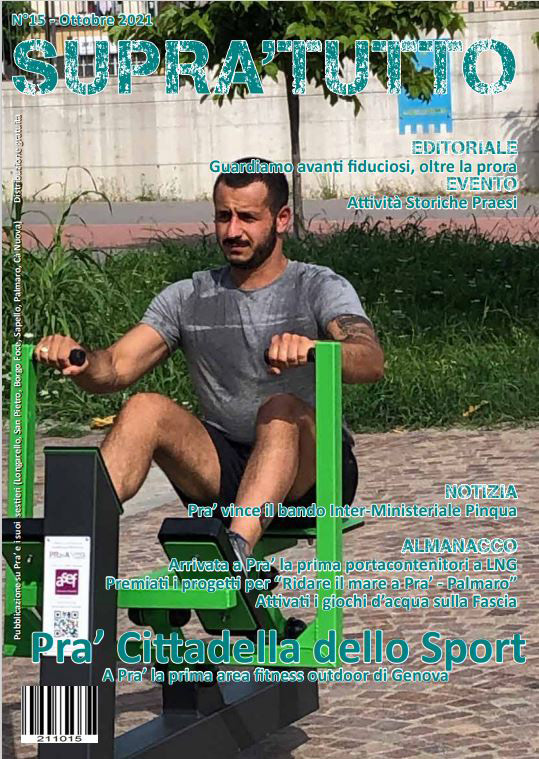 To amplify the voice of the local citizens the digital newspaper / paper magazine SuPra’tutto was founded, reaching some thousands of readers every day, and becoming the reference for the local information, especially for everything related to the harbour. The “open account” of the name of the harbour of Pra’, previously even wrongly named, was fixed, and step by step the “impossible” became possible.

The dialogue straight with the European Commission, making available some funds for the rehabilitation of the local land, made possible the reshaping of 2/3 of Pra’ shoreline, which today is good looking and busy of runners, swimmers, rowers, joggers, especially after the creation of the “Sport Citadel” with its athletic track and as well, recently, the open public fitness machines area, realized by the Foundation. The PRimA’vera Foundation as well produced and edited 2 videos to visualize the journey to the Pra’ of the future which became very popular. One of the Foundation motto is “Gutta cavat lapidem” an old Latin proverb meaning that even a water drop, if well directed and persisting, time after time can even cut the stone.

The Foundation’s actions got the respect of the local authorities, bringing back as well the lost self-confidence and pride to Pra’ citizens, generating enthusiastic and positive side initiatives by several local associations, step by step enriching the local culture and territory. The problems generated by the harbour construction, and the daily problems arising from the container terminal operations are still heavy, there’s still a lot of work to do, anyway Pra’, as the “Phoenix”, is rebirthing from its same ashes, and has taken the right path to fix all those issues at best, sooner or later.

Guido Barbazza is a resident of Pra’. He is an engineer, novelist and founder of the Fondazione PRimA’vera.

Read more about the contestation at the Port of Genoa Pra’ in Archive.