Tarragona, located on the coast 100 km south of Barcelona, has 132,000 inhabitants. A short distance from the city is the most important petrochemical complex in southern Europe. The oil, which arrives through the port, feeds the refinery, which produces 20 million tons of raw materials for the manufacture of plastics annually. Just a few kilometers from the industries of this complex there are important tourist resorts, such as the Port Aventura theme park and the beaches and hotels of Salou.

The city of Tarragona itself has so far been relatively spared from mass tourism. The city’s beaches are frequented by the people of Tarragona all year round and by tourists, largely domestic, in the summer season. The old town, where important monuments from Roman and medieval times are concentrated, is a quiet place despite being a lively neighborhood, bursting with commercial and cultural activity. It is also historically home to a longstanding gypsy community.

The beaches of the entire region – known as Costa Dorada – are affected by “regression phenomena”. Autumn and winter storms are more violent; the marine meadows of seagrass such as Posidonia, damaged by human activity, have disappeared; excessive construction has affected the dune system and the natural dynamics of sand transport have been interrupted by the presence of breakwaters and ports. The affected municipalities have tried to boost tourism, with little success, by moving sand from other less affected beaches.

The Port of Tarragona’s interest in cruise traffic began in 2012. That year the Port Authority set five growth axes: international projection, traffic diversification, boosting infrastructure, commitment to cruise ships and sustainability (in this order). In the first seven years (2013-2019), passengers grew from 1,394 in 2013 to 128,000 in 2019, [1] a ten-fold increase.

The commitment to cruises has developed with the consensus of the institutions of the territory, which make up the Taula Institucional de Creuers, in which regional and local authorities, several town councils and the local Chamber of Commerce are represented, as well as the Federation of Hotels and Tourism companies, and of course Port Aventura.

Cruise traffic dropped drastically during the pandemic. However, the port went ahead with the construction project of a cruise ship dock (Moll de Balears) which was inaugurated in October 2021. It allows larger cruise ships to be accommodated and up to four ships to dock simultaneously. The Port Authority recently announced the construction of a terminal for cruise ships, planned to go into operation in the summer of 2023, and awarded its management to Global Ports Holding, which becomes a member of the abovementioned Taula.

Global Ports Holding hopes that the “restrictions” that Barcelona City Council plans to impose on cruise ship traffic may represent an “opportunity” for Tarragona and that the proximity to both Reus and Barcelona airports will boost the arrival of cruise ships. They speak of a “new destination” away from the “usual places to visit in the Mediterranean”. The aim is clearly to exploit a new “virgin” territory in contrast with the wear and tear of the Barcelona brand. In short, the aim is to put Tarragona on the map and turn it into a new cruise brand. [3]

Seeing a neighborhood, our personal ties, a history and a culture turned into merchandise, a product to sell, is something that deeply shocks us. We do not want to undergo the process of tourist saturation and gentrification in the old part of town like Barcelona. The cruise ship promoters in Tarragona themselves are aware of this danger: “We do not want concentrations seen in other Mediterranean cities end up generating an effect contrary to what is sought with the arrival of cruise passengers,” said the president of the port. [4]

These good wishes collide with the growth pretensions of GPH, which proclaims its aim of reaching 250,000 cruise passengers a year in the medium term (between “five and ten years”). [5] This figure is hair-raising considering it doubles the number of inhabitants of the city. In a recent interview, [6] the regional director of GPH repeated up to four times as a mantra that the number of cruise passengers is not a problem, it is enough that “the flows are regulated”, and announced as a solution the creation of an application so that all tourists do not flock to visit the same places.

Another very worrying aspect is the pollution caused by these ships. Using the old strategy of diverting attention, the director of GPH declares in the same interview that «There are many other sectors that pollute more than a cruise ship». He claims, of course, that the sector “is betting a lot on sustainability… in terms of newly built ships”, whereas for those that were already built “they are modifying their propulsion systems to be able to eliminate these harmful gases and convert them into water vapor”.

This phrase “turn harmful gases into water vapor” sounds like magic to me; I suspect it might be the use of scrubbers that filter gases and expel contaminated water into the sea, that is, they transfer atmospheric pollution to the marine environment. He also mentions ships “powered by liquefied natural gas and ships that can be connected to the electrical network in the port so as not to emit any emissions”, which again amounts to displacing, rather than solving, the pollution and carbon footprint to other points of the energy supply chain.

Our Stop Creuers platform is taking its first steps. It brings together representatives of environmental and civic entities as well as people in an individual capacity. On May 15, 2022 a first demonstration was held in the port on arrival of the Costa Diadema cruise ship. Although the demonstrators were few and far from the ship, the police identified them as “endangering public safety”, which in our view is really shocking. 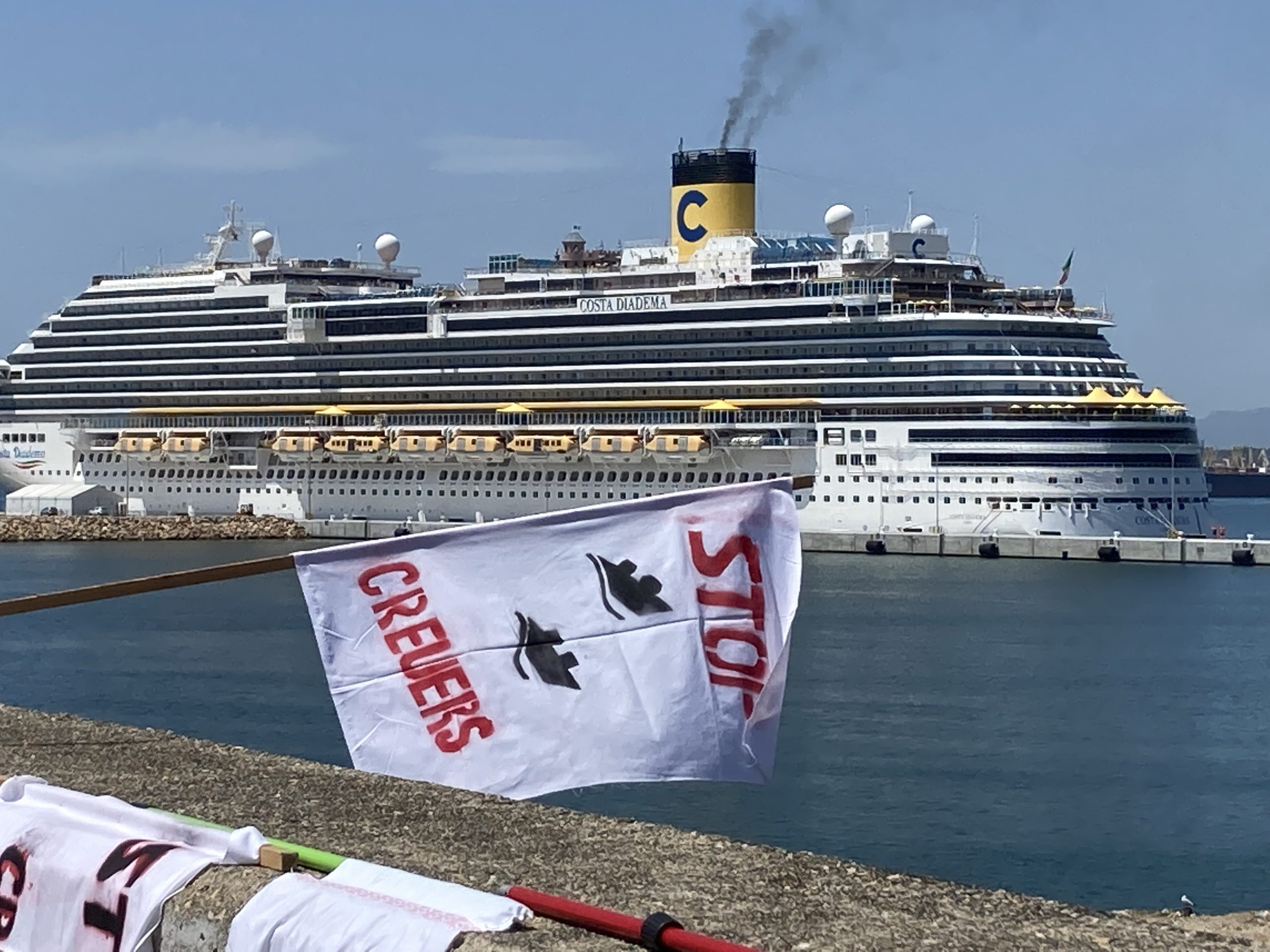 We are not opposed to tourism when it is respectful of the environment. Our aim is to study and make the true consequences of the arrival of these ships in Tarragona known, beyond the biased data provided by those who profit from this business. The real economic impact on the territory has not been studied and we think that citizens are totally unaware of what is coming their way. Until now, we have been spared from the saturation of cruise ships and mass tourism that harm daily life in Barcelona so much, especially in the neighborhoods closest to the port, and we intend to keep it that way. We defend the quality of life in the city and the quality of the air and water, already badly threatened in Tarragona by the presence of the petrochemical sector. 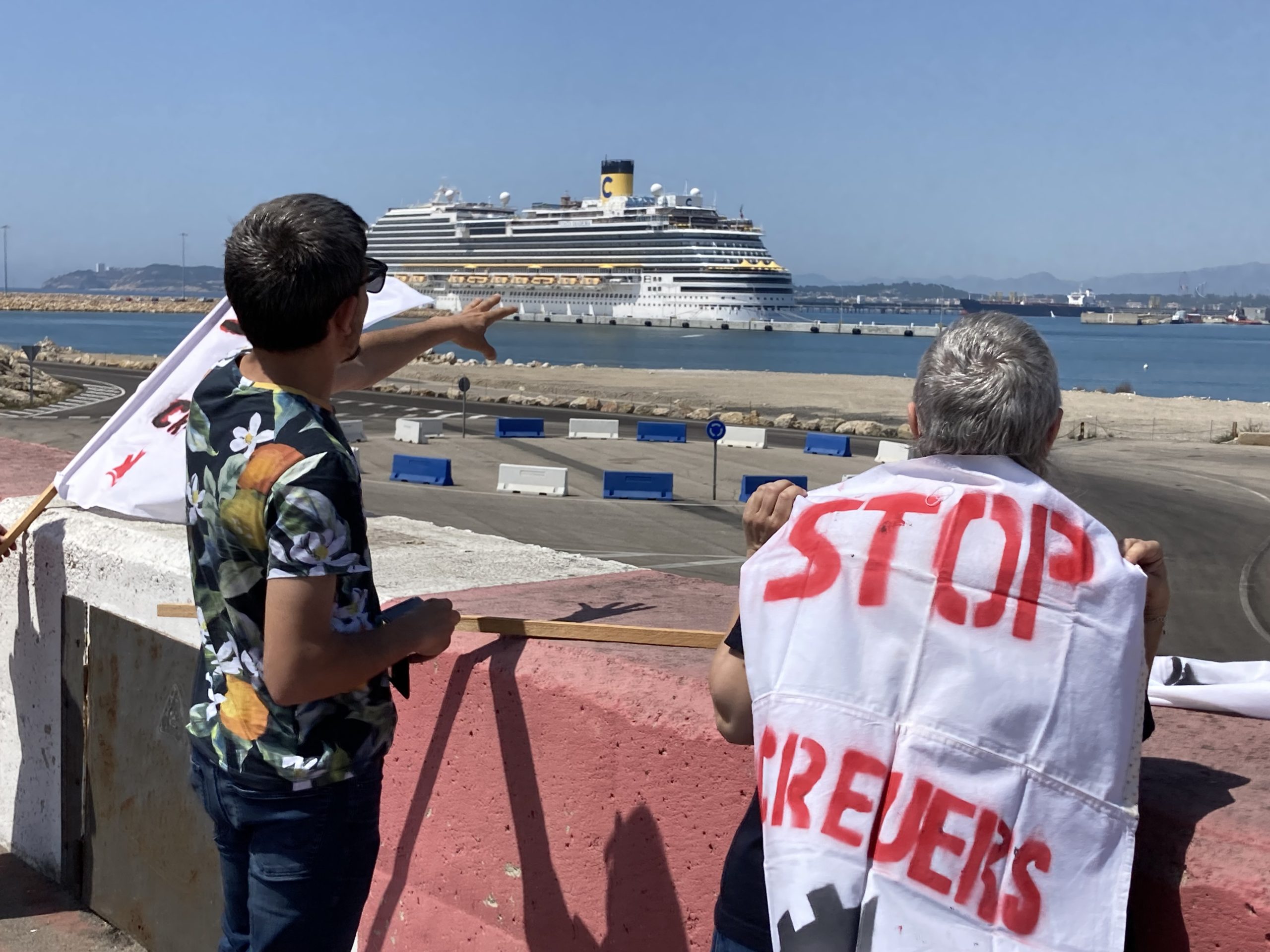 [3] A new brand has been created, Tarragona Cruise Port Costa Daurada; we have recently seen free flights to Barcelona advertised in their web page https://www.tarragonacruiseport.com/)