The Sri Vimukthi fisher women’s organization was formally launched in 2000. The main reason was that at the time, Sri Lankan fishermen who went fishing in the deep sea were arrested by Indian coast guards for violating the IMBL between India and Sri Lanka.

From that day, wives of the fishermen attempted through various means to secure the release of their husbands and did not find any solution. It was in this context that a priest from Kerala, India visited NAFSO. When the women learned that the priest had come to Sri Lanka, they went to meet him. Since then, women have joined the National Fisheries Solidarity Movement [NAFSO]. Under the guidance of the National Convener of NAFSO, women fought on many fronts and also protested outside of the Ministry of Fisheries until their husbands were freed.

Since then, Sri Vimukthi has been leading many struggles whenever fisherfolk rights are violated, and not limited to fishing-related struggles only; we have joined hands with farmers, plantation workers, displaced communities, war-affected people and also with workers.

In light of the awareness campaign started in 2014 by the Peoples Movement Against Port City, Sri Vimukhti realized that the Colombo International Financial City [CIFC] – also known as the new Port City Colombo – was an illegal project, and so mobilized more fellow community members against it. The leaflets prepared by NAFSO and PMAPC were used to educate communities, focusing on the detail of the CIFC, rather than just sand mining as had been done previously by actions led by the Catholic church. 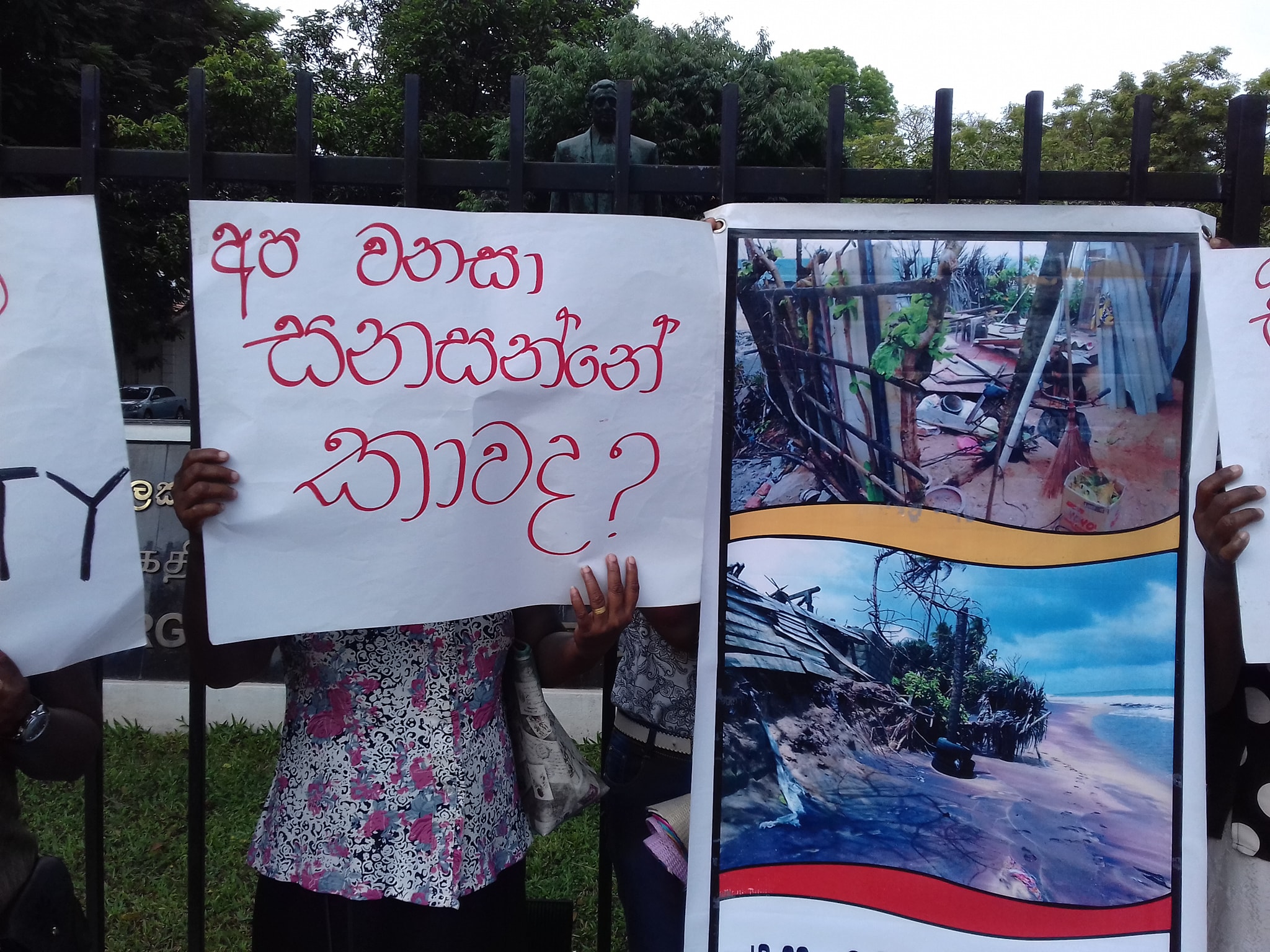 We first conducted an in-depth education program with selected women leaders. They played a major role, in collecting signatures in fishing villages for a people’s petition by PMAPC. The protest letters were sent to the Coast Conservation Department [CCD] and handed over to the same agency as the scoping agency of the CIFC. Herman Kumara, National Convener; Hemantha Vithanage, Chairperson, Friends of the Earth; Sajeewa Chamikara, environmentalist, handed over the papers in front of the Ministry of fisheries.

All these campaigns were organized with the discussions held among the PMAPC Members. We used social media to mobilize people. One of the campaigns were launched during Christmas season. Hence we had to make several telephone calls other than email communication, sending letters and organizing community meetings.

There were several campaigns launched by the PMAPC during the Presidential election campaign of 2014, in which the opposition promised to stop CIFC once elected. As a result of the agitations, the president elected in January 2015 decided to stop the project temporarily and study the impacts on the communities.

Between February and August 2015 the project was on hold due to people pressure and the government of Sri Lanka came up with a solution to deal with the project, saying, “Unless we continue the CIFC construction, the country needs to pay huge penalty as the China Harbour Engineering Company would sue the government, so we need to continue according to the agreement of previous regime.” 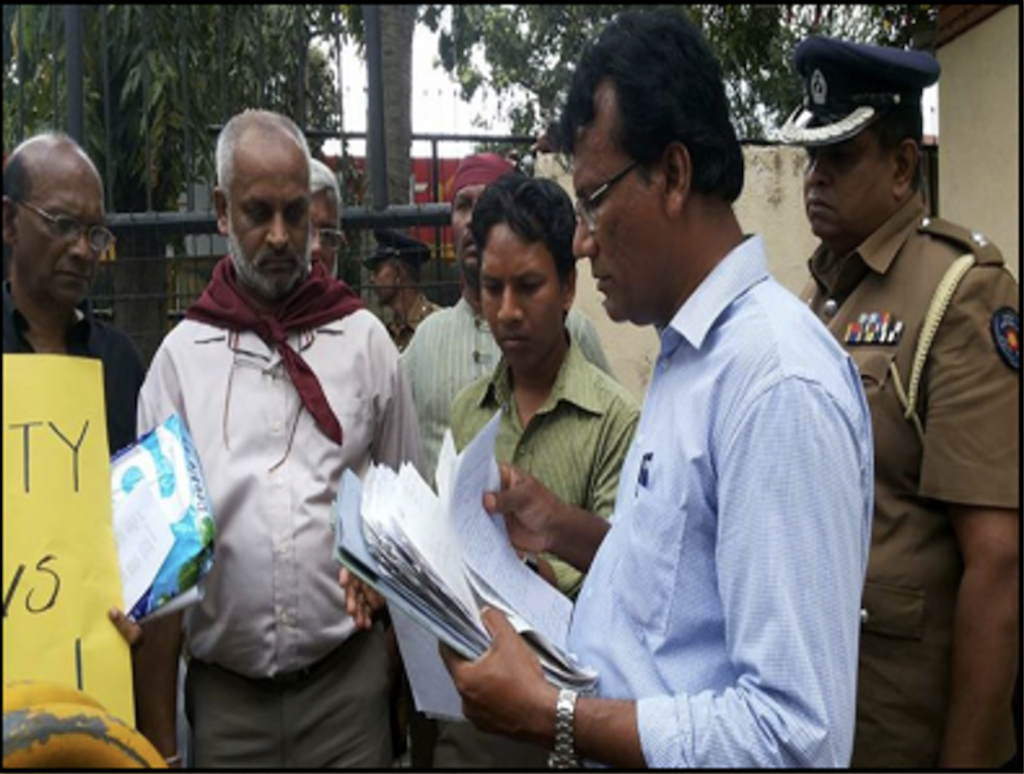 The image on the left shows PMAPC led a campaign to hand over the petition to the Coast Conservation Department as the scoping agency of the CIFC EIA process and project approving agency. Herman Kumara, National Convener, Hemantha Vithanage, Chairperson, FOE, Sajeewa Chamikara, Environmentalist, with the papers in front of the ministry of fisheries.

All these campaigns were organized with the discussions held among the PMAPC Members. We used social media to mobilize people. One of the campaigns were launched during Christmas season. Hence we had to make several telephone calls other than email communication, sending letters and organizing community meetings. 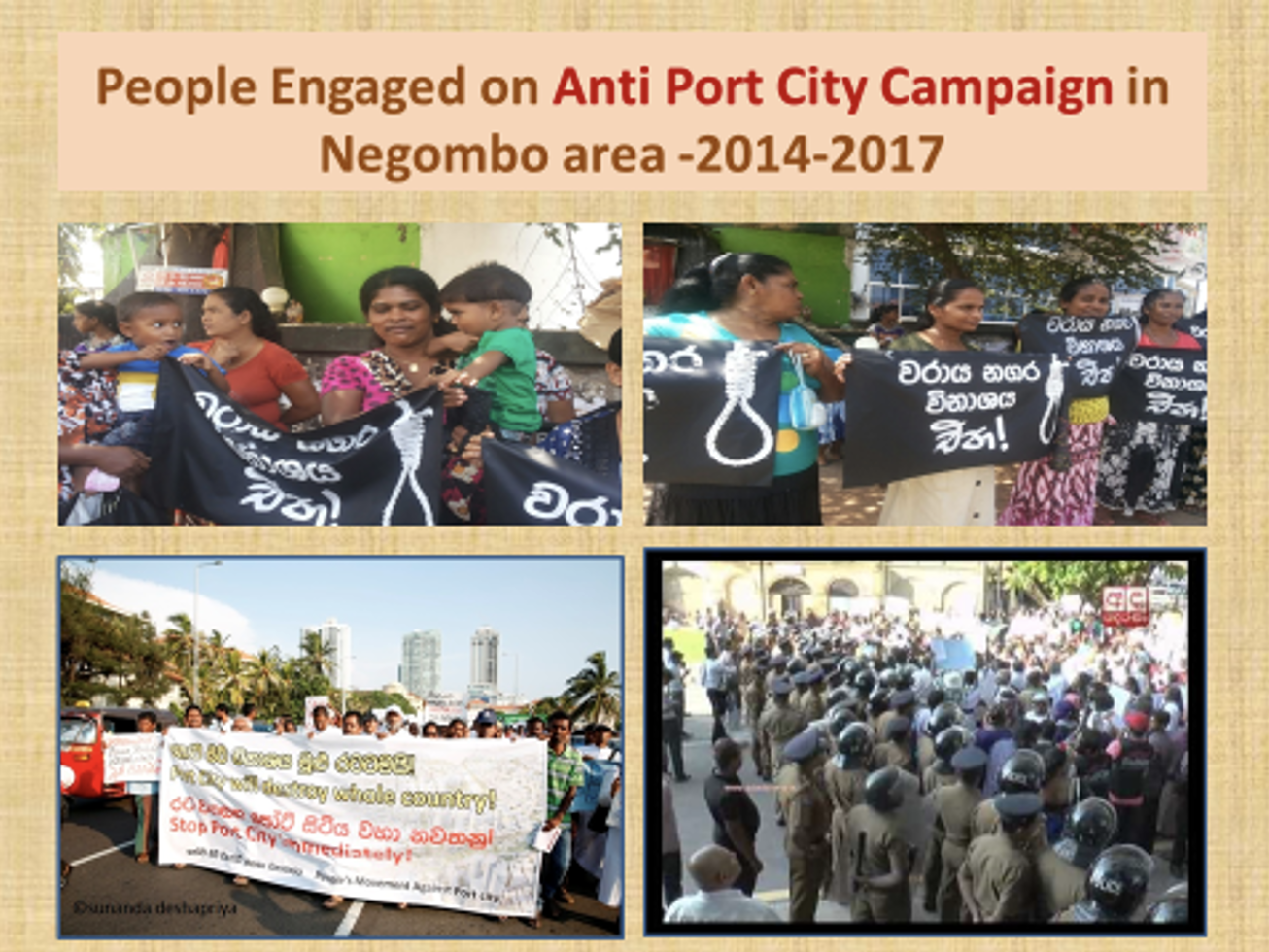 The image on the right shows Sri Vimukthi Fisher Women Organization leaders together with PMAPC engaged in several campaigns inNegombo, Colombo, Chilaw and many other areas along the western and north western coastal belt. For these campaigns, there were several fisheries organizations other than SVFWO and NAFSO engaged. MONLAR, CEJ, Small Scale Fisheries Trade Union, LST, Janawaboda Kendraya and many more organizations got together to organize campaigns in Colombo. 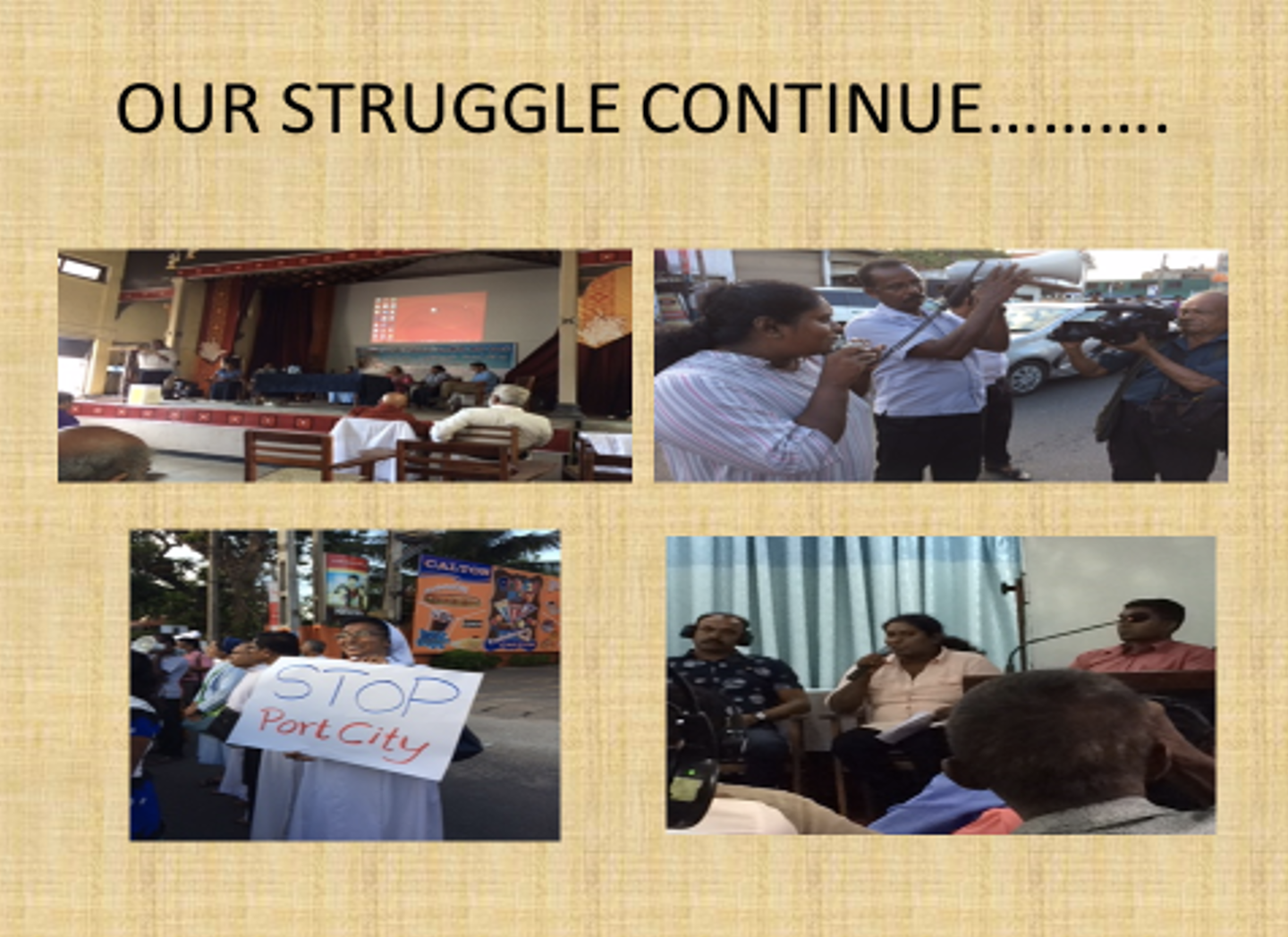 The image on the left  shows Seminars, Street agitations, Round Table Discussions, Media briefing and Stake Holders Meetings were conducted to in several occasions to raise the awareness, register people’s protests, dialogue with policy makers throughout the campaign launched during this period.

The PMAPC brought various sectors together to highlight how the CIFC would affect the country. The scholars looked into how the economy, environment, food security, fisheries, social life would be affected by the CIFC and presented their reports. Based on the reports, PMAPC prepared a book and this was also used as educational material which circulated widely among various communities. The editorial board was formed and editors met communities, scholars, media and journalists. Most of the team members voluntarily served, considering the issue as an important national matter. One of the Bishop of Methodist Church was very much inspired by the group at the time whenthe Catholic Church gave up their campaign and deserted the fishers, and other members agitated against the CIFL.

PMAPC wanted to keep the momentum of people’s agitations with various activities. Several campaigns were launched in several places to stage protest against the CIFC. The campaign continues with the limited number of groups and the Coordinator of Sri Vimukthi Fisher Women Organization leading the People’s Movement Against Port City with the support of concerned community members and the CSOs, media and religious groups. 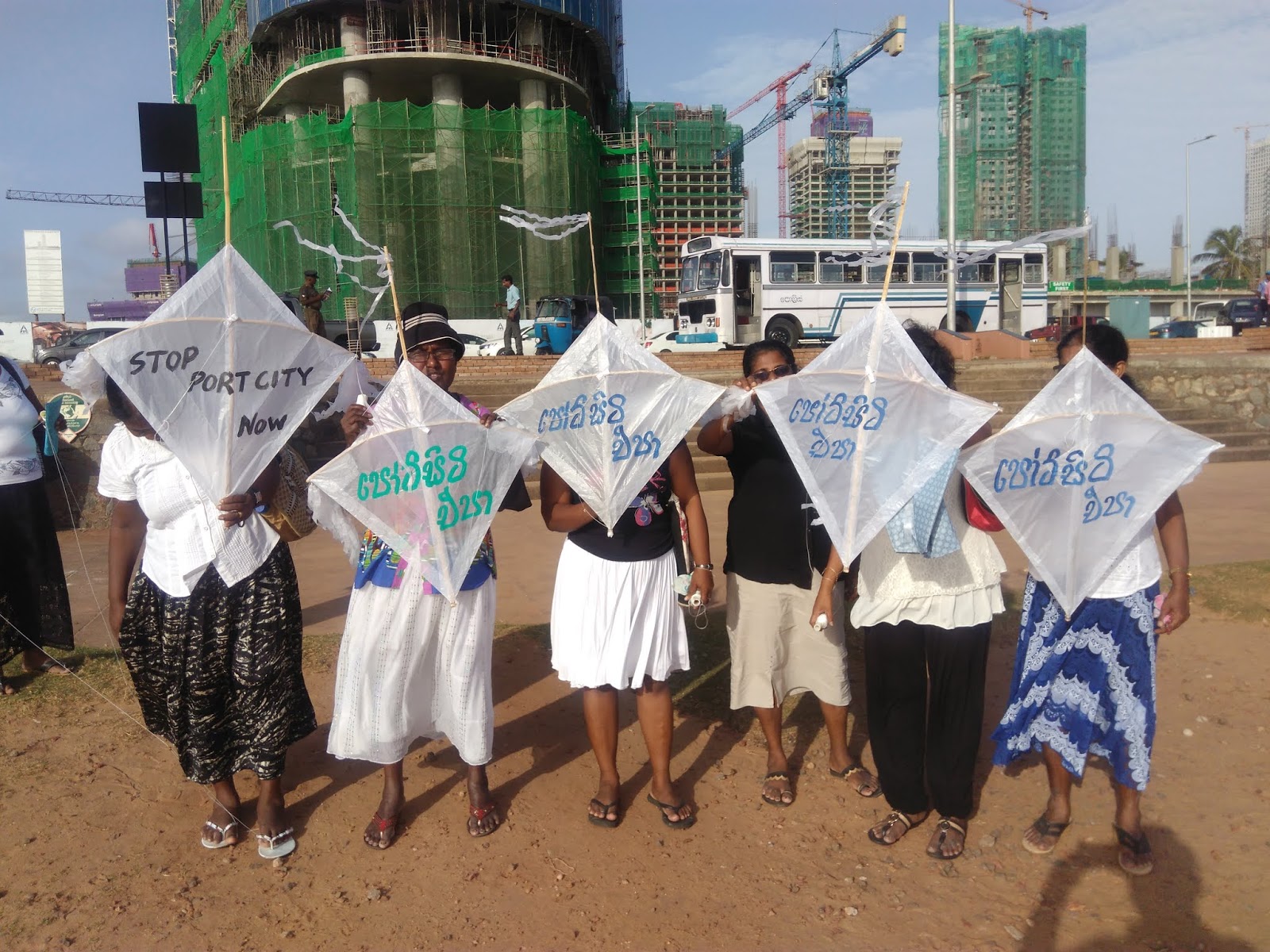 Subashini Deepa is the Negombo district coordinator of Sri Vimukthi – Fisher Women Organisation. Read more about the contestation at the Port of Colombo in the section Archive.