Out of control: ship emissions and the issue of environmental monitoring

The Committee for Environmental Protection – Centre-West Genoa, of which I am president, was born in 2017 in the San Teodoro neighborhood and is supported by the consultancy of ECOINSTITUTO RE-Ge. For several years, many of us had been engaged in denouncing the pollution produced by marine traffic, reporting it to the Port Authority, City Hall and other institutions. But we had been systematically ignored.

After creating our committee, we collected more than 2,000 signatures via word-of-mouth. We then organized two demonstrations in May 2018 and May 2019, as well as conferences and workshops, creating awareness on the pollution problem that affects port areas. No public demonstrations took place in 2020 and 2021 because of Covid-19.

Our protests were based initially on our sensorial experience: black or even yellow smoke, bad smells, ship noise and dark dust on the external surfaces of our buildings, and even on our hanging laundry. 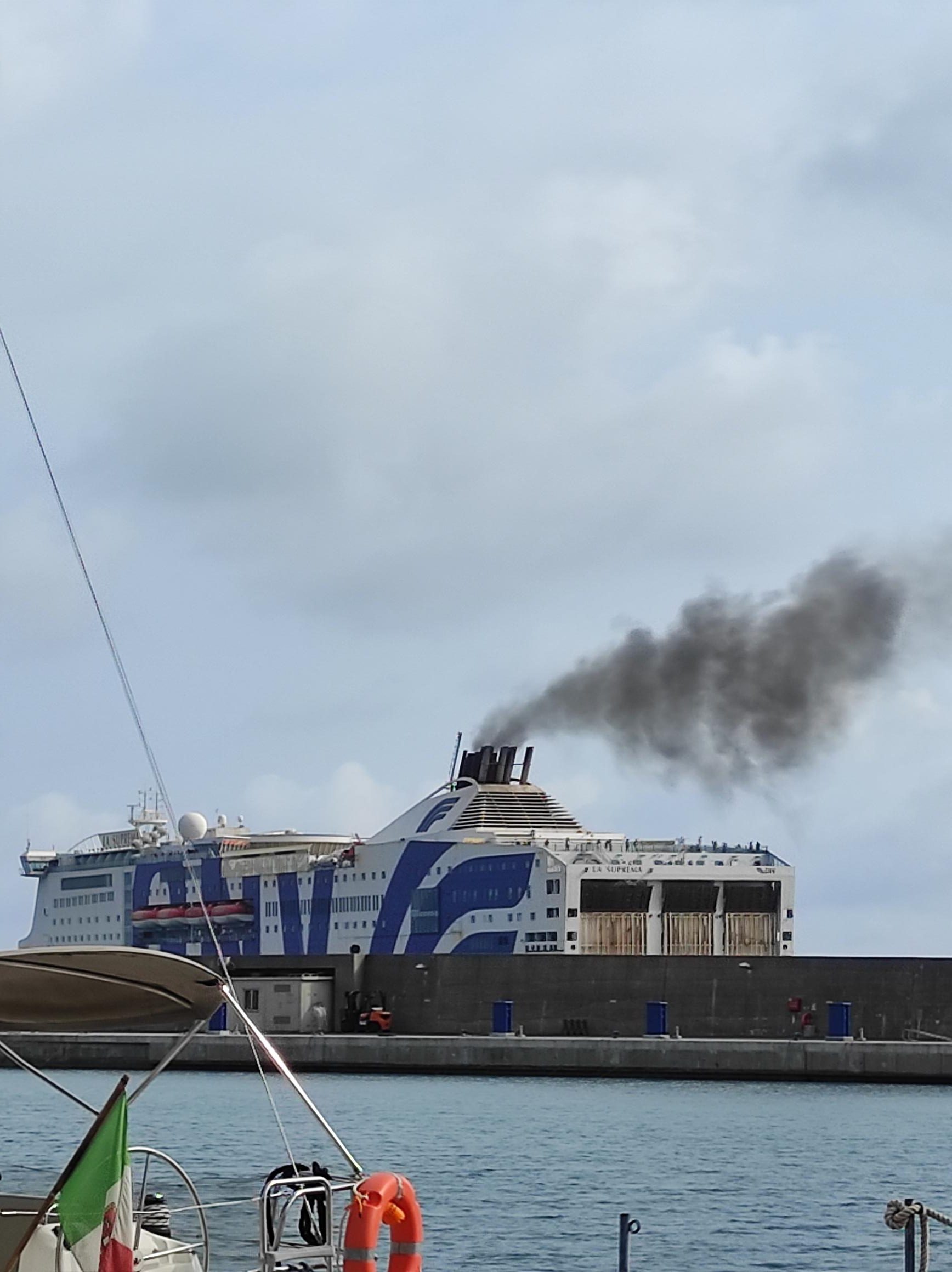 Back in August 2011, at the request of a person who later participated in the creation of the committee, the municipal police measured the sound reaching his apartment from the port at 10 pm. Before the departure of well known ferry the sound level was 54.4 dB, while after its departure the residual level measured was at 42.3 dB. The limit set for night time was 50dB.

As well as noise, other official data on atmospheric pollution have been made available by ARPAL. Their equipment records the atmospheric concentrations of various pollutants: NO2, SO2, ozone, carbon monoxide, fine dust (in some stations) and even benzene. The measurements are available on the ARPAL website, hour by hour. However, despite this mass of data, marine traffic is still obscured. The control unit closest to the port is located in Via Bruno Buozzi, but is located on a road with heavy traffic and at street level. Consequently, this control unit ends up mainly monitoring road traffic. The other control unit next to the port is in Corso Firenze. Crossing that data with those about the movement of the ships, however, you can still see peaks in the detection curves. 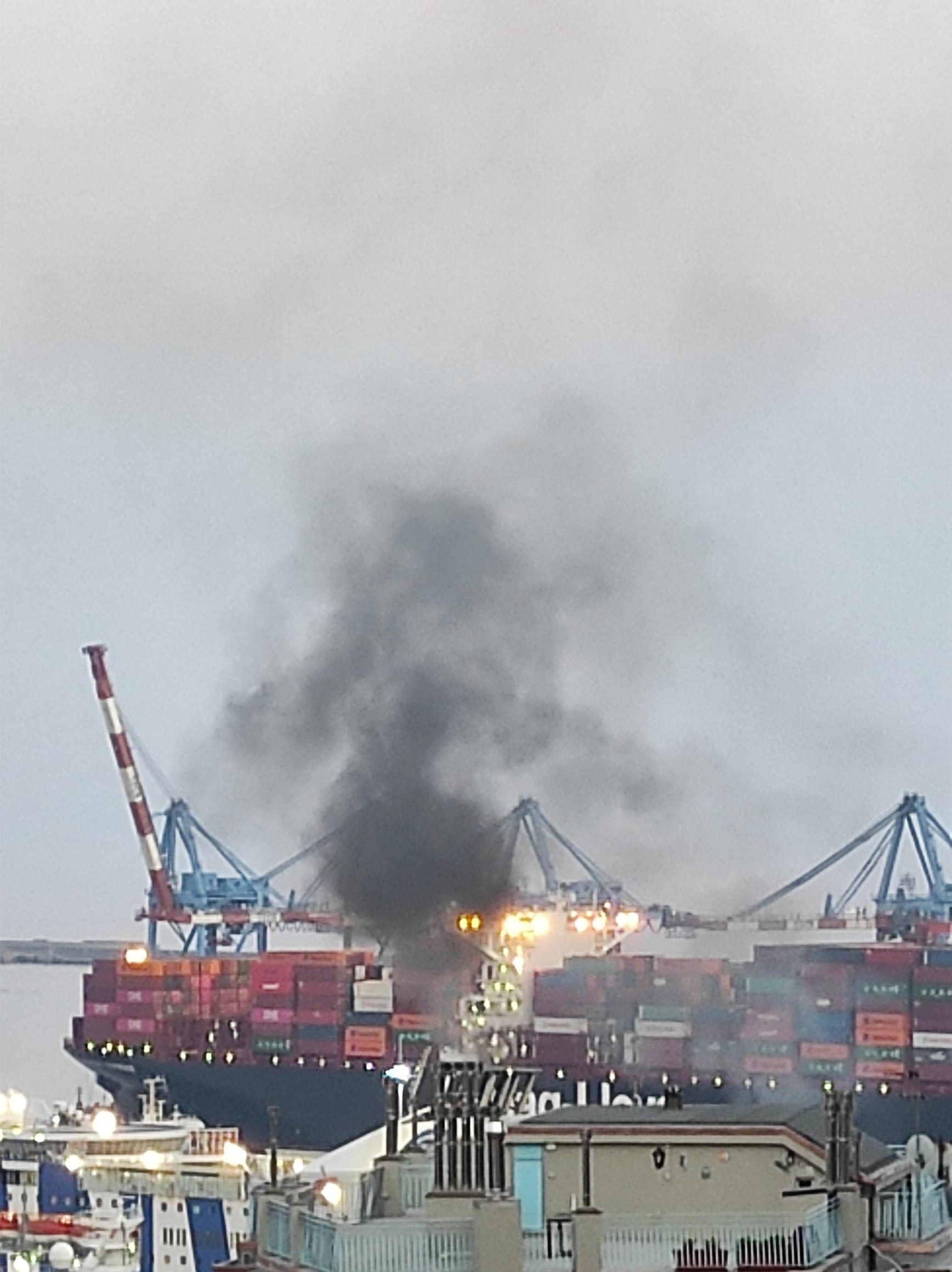 Between 19-23 June 2016, the association Cittadini per l’Aria, which is linked to our Committee in Genoa, measured ultra-fine particles from the Hotel Savoia in Piazza Principe (about 800 mt from the sea): during the docking and departure maneuvers of ships, particulate emissions were 40 times times higher than those of clean air areas. Research undertaken at the University of Genoa has shown how naval emissions contribute to the concentration of PM 2.5 in Genoa for about 10% of the total, with a clear increase in values in the summer season.

The problem of monitoring through control units is that they cannot determine the source of pollution. What is needed is the so-called ‘inventory of emissions’, which is able to consider international standards on emissions associated to the power of ship engines, as well as the traffic in the port. The 2015 report issued by ARPAL on atmospheric emissions revealed that maritime activities are most responsible for NOx emissions (62%) and particles (39%), followed by road traffic (26% and 28% respectively). The situation improves with favorable winds, which reduce NOx down to 40%, but gets worse in summer, when the winds are not favorable and there is high port traffic.

Availability of precise and updated data should be a priority for City Hall and ARPAL in order to target the sources of emissions and to avoid European fines, which taxpayers end up paying. We have developed a more accurate method for an autonomous calculation of ship emissions, considering international references (EMEP/EEA air pollutant emission inventory guide book), but these data are not considered official.

Another important detail to consider when monitoring emissions from the port is the (increasing) age of the ships and ferries that circulate – some of them here in Genoa are more than 40 years old. The other polluting factor is the vertiginous increase of the number and dimensions of cruise ships, which even if they are less polluting compared with the past thanks to technological improvements, already have power with an electrical absorption of more than 10 MW at berth. Every cruise ship uses the same power of a town, such as Ovada. The standards that regulate the environmental impact of maritime traffic are the MARPOL (MARine POLlution), established by the IMO (International Maritime Organisation), but these standards are influenced by shipping companies. As an example, limits for NOx emissions are not applicable to ships built before 2000, while the Energy Efficiency Design Index – used to control the emission of CO2 – is not used for ships built before 2013. So older ships have a sort of environmental immunity.

It is estimated that premature deaths in Genoa caused by pollution (not only by maritime traffic) are about a hundred cases, with a similar number for severe hospitalizations. This is the direct cost, but there is also an indirect one. As reported by the previously mentioned document by ARPAL, an ongoing legal dispute is taking place with the European Commission for exceeding the annual average emission of NO2 (regulated by the 2008/50/CE) between 2010 and 2013. 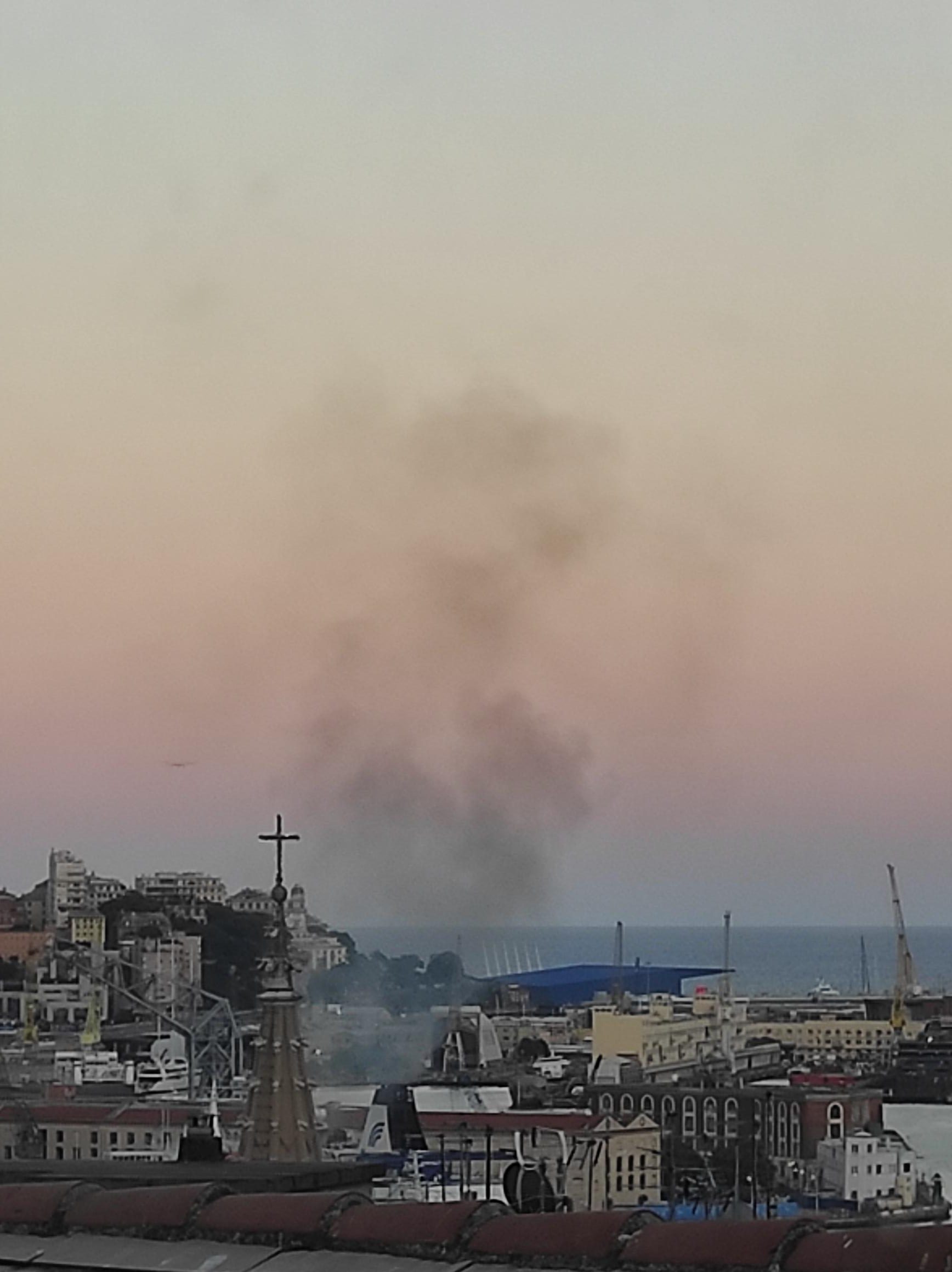 Being aware of the importance of targeted monitoring, we also contacted the Environmental Department of the Liguria Region, demanding pluri-seasonal monitoring of pollutants in the more critical points of the area close to the Cruise Terminal and the Ferry Terminal of Genoa Harbour. According to these criteria, a few sensors will be placed by ARPAL inside of an international project. In parallel the above mentioned sensors will be integrated by some low-cost stations for controlling fine particles (PM10s and PM2,5s). This approach is known as “citizen science”.

Control of emissions of ships is in the hand of the Coast Guard (Capitaneria di Porto) . Controls of the ship’s oil and fuels are mainly two: the one indirect on log-books and the other direct by measuring the sulfur content in the fuel (in mass). According to Italian law, the first must be applied to 10% of the ships that enter the port (counting them once at year); the second control to the 30%. As a consequence the direct control can be limited to the 3% (2% before January 2020). On the other had control of NOx is generally applied through a document check. The direct method for measuring emissions (NOx , Sox, particulate, etc.) should be drilling the chimney and installing special sensors. Acquisitions and analyses should be carried out with special instrumentation, and rarely used. Five-six years ago seven ships have been inspected with this direct method in Genoa c/o ARPAL and Coast Guard. In one outstanding case direct results were non compliant with the certificates data.

With such ineffective laws, controls are scarce and there is a possibility for shipping companies to use not compliant fuels and/or not efficient equipment.

After long discussions and a number of meetings with the port institutions, in July 2019 (agreement renewed at the beginning of 2021), the Coast Guard signed a volunteer agreement with companies that own cruise ships. Nevertheless this agreement has not been signed by companies that own ferries and merchant ships. The agreement is based on the use of fuels with low sulfur content at a decade of miles far from the port already.

There are some technological solutions that could improve the situation at berth, i.e. the so-called “cold ironing”.The Electric docks could be a solution to eliminate smoke and noise. Scrubbers are also useful for decreasing SOx when burning heavy fuels but when in open loop they move pollution from air to sea. LNG or conversion to methanol are also alternative options (and in the future hydrogen). These options have also secondary effects, which should also be subject to inquiry.

At a political level, the emissions are considered an inevitable fact by many institutions. In a follow-up meeting with city hall, the Mayor seemed concerned about the fact that if the above said volunteer agreement should be converted into ordinance shipping companies could decide to move to another port, with the city losing jobs. 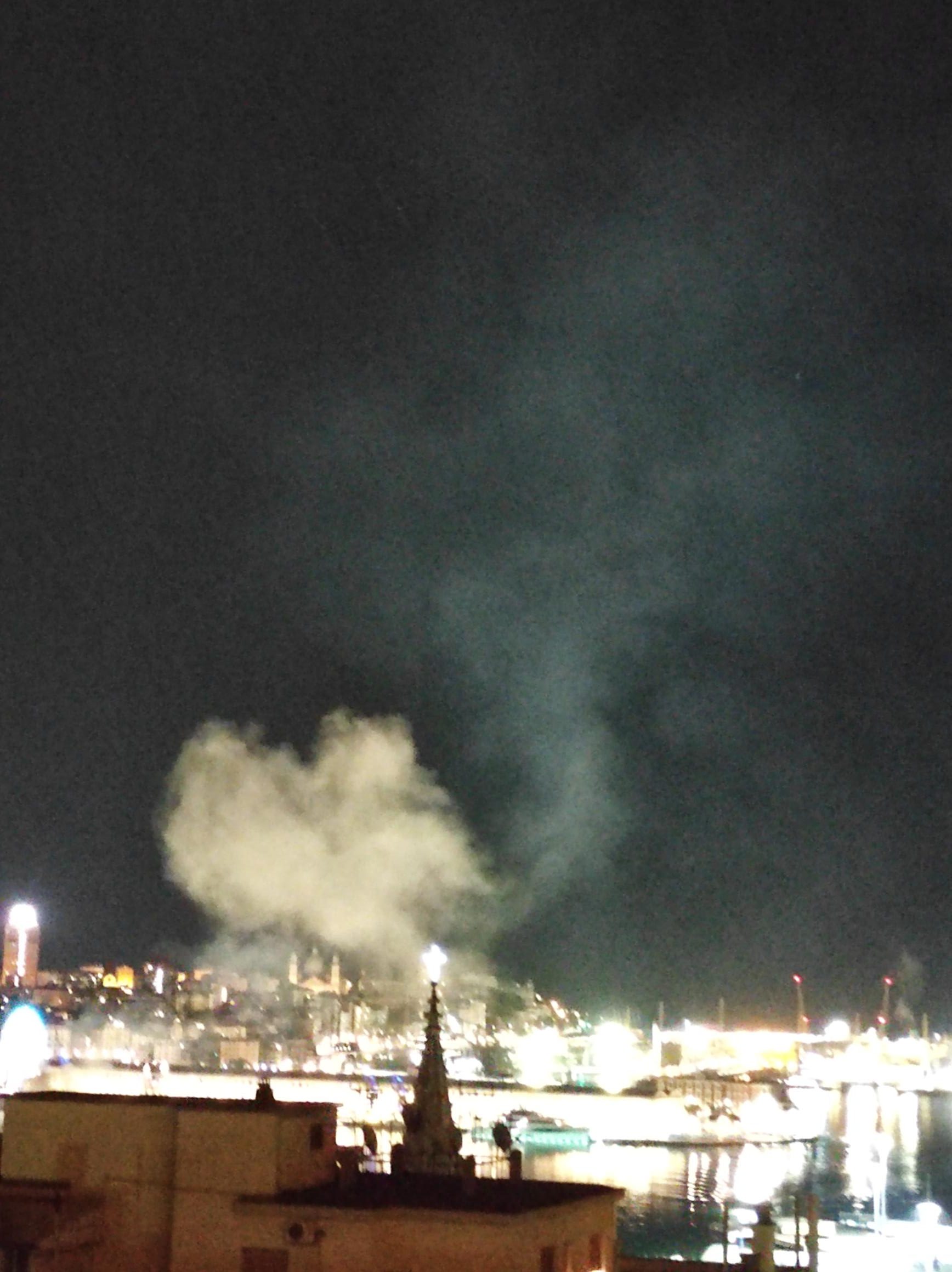 It also emerged that the mayor has very little power over the port in the present system. According to us, our proposal however, would not produce a migration of shipping companies to other nearby ports as there are many committees of citizens that are taking action along the Tyrrhenian sea.

As a conclusion we remarked to institutions that shutting down the port can’t be a real option, in case of excessive pollution, as it is not the same as to prohibit circulation of some categories of cars in a city. The situation was not fantasy because we suffered from heavy pollution from ships during Covid-19 lock-down, when many cruise ships and ferries were at berth contemporarily.

In those circumstances some ships must be moved outside the port, by ordinance.