This track is an extract from  FRICTIONS. It contains interviews recorded in December 2021.

The contested encroachment of the port on the city-centre

Dr. Kemal Birdir is a citizen of Mersin and a professor at the University of Mersin, Faculty of Tourism.

Gökçe Celik: What are your reasons for attending the protest?

Kemal Birdir: Mersin is, of course, a very important port city in Turkey. The port is continuously planning to grow, encroaching on recreational and cultural places of Mersin. And since Mersin is not very rich in terms of park areas, that growth is a major threat to the people’s quality of life in Mersin. We want to increase people’s awareness about the impacts of this project on their quality of life. That’s why I joined the protest.

GC: In your opinion, who and what communities are contesting this project?

KB: Of course people who are environmentally conscious; people who believe Mersin should be greener and more liveable – these inhabitants have largely contributed to the protest. People are contesting the encroachment of the port on Ataturk recreational park; this is a park located at the center of the city, which is actually almost the only green place there. This will have a huge impact on the city.  Civic organisations are taking part in the protests, such as TEMA (Turkish Foundation for Combating Soil Erosion), and BARO (the organization of lawyers in Mersin).  And some of the environmental organizations and the environmental engineers in Mersin also contributed to the protest.

GC: Have citizens been consulted about the project?

KB: No, as far as I know. There was no proper consultation regarding the expansion. It was just an immediate action presented to Mersin citizens. This is also a reason why people are protesting. But of course the port authority knows that if they would have consulted the citizens, they would not get citizens’ support. That’s why probably they did not want to do that.

GK: In your opinion, has the EIA been properly conducted?

KB: Unfortunately not. That’s one of the major issues that arise during the protest. Because the expansion project is a direct and very harsh project, which limits the park’s area, intensifying the environmental bad effects of the port.  If this expansion continues to grow toward Mersin city center, the port starts to become the city itself. That’s a major threat actually when the project is carefully analysed. It should seriously be reconsidered before it is completely applied.

GK: What is the value of Ataturk Park for the city and its citizens?

KB: Well, Ataturk Park is historically a very important place for Mersin, because there was an international trade fair for example held for almost 20 years at that park. And it is, as I just mentioned, the only actually green area that has some sort of recreational value to the people living around the city center; this is particularly important for the people who spend their whole day in the working offices in Mersin city center. And also it is adjacent to the small fishing port  – they both add a great value as a recreational and touristic area for the city. Therefore protecting the Ataturk Park recreational area I believe is a crucial action, a crucial decision for Mersin’s future. 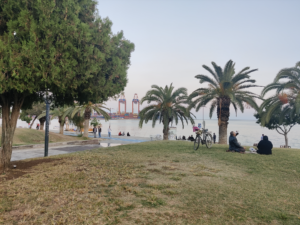 GK: Who do you think is gaining benefit from the expansion of the port?

KB: Only the port authority. They are of course trying to provide a better service to the ships using the port. And they would like to have more space to stock the exported and imported products there probably. For sure, they have more space for their operation but that should not be at the expense of people’s space and everyday life. Especially, when these areas are so limited in the city; we are almost two million people living around the city center. Therefore, they should look for some sort of more creative way for expanding the port. It could be a little bit expensive maybe for their plans, but the city should defiantly unify against this sort of project. It is a recreational area for their future and for the future of the next generations. 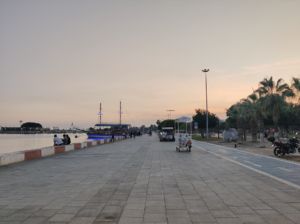 GK: How could this project affect tourism in the city?

KB: Well of course, since we don’t really have as many international and national tourists visiting the city centre, it is really very difficult to do a correct evaluation of this action against the tourist numbers and tourism activities. But Mersin city center grows very fast in terms of attractions. Some of the old houses started to be renewed. There is a  gastronomy museum about to open in a year and Mersin fish bazar is also an attraction for the coming year. Therefore, many people believe that Mersin city center could be a great attraction for tourists. Therefore, in the long run, that expansion of the port will defiantly affect all the touristic plans of Mersin in a bad way.

GK: Could you please tell me a few things about the ideal port city relationship from your professional perspective?

KB: I am a tourism academic, therefore I  am looking to the changes from the perspective of tourism demand and the people’s life quality. But in tourism expansion plans also what we highly recommend is always consult the citizens who are affected by that sort of major changes in the plans. If the port authority follows that simple rule and tries to consider the people who will be affected by that sort of plan changes, then their relationship with the people and could improve.  And this is a very nowadays common approach – to consult the locals when such large changes start to be planned and applied in ports.  We should not exclude the citizens from that sort of growth plan. When the approach is ignorance toward people living in the surrounding and the directly affected area, these people become much angrier against the changes defiantly.

Gökce Celik was born in Mersin. She holds a BA in Urban and Regional Planning, from the Mimar Sinan Fine Arts University, Istanbul, Turkey, and an MA in Maritime and Air Transport Management at the University of Antwerp, Belgium. She is particularly interested in spatial governance, sustainability, port-city relationships, and the management of megaprojects in the frame of regional planning.