This podcast is part of the serie FRICTIONS. It contains interviews recorded in July 2021, with inhabitants of Pra’ and members of the PRimA’vera foundation: Guido Barbazza, Alessio Ponte, Davide Siviero, Francesca Franchelli and Nico Calloni.

The process of periferipheralization of Pra’ began in 1926, when the Italian Government (at that time in the hand of Mussolini dictatorship) incorporated Pra’ and other 18 municipalities to the Municipality of Genoa, being such decision justified by the narrative of better coordination for the urban and industrial growth. Once dedicated to agricultural church and tourism, with the presence of villas and churches, Pra’ experienced record urbanization between 1955 and 1965 – all without a master plan. In those years, the district called Palmaro (on the western side of Pra’) reached about 12,000 inhabitants all of a sudden, according to the urban speculative logic, repeated in all the districts of Genoa (Giontoni, 2017).

The construction of Palmaro and the CEP made the old municipal territory of Pra’ the district of Genoa with the highest demographic growth between 1951 and 1991. Genoa, in the same period, developed much lower growth rates (see table 1), and from the early 1970s began a slow demographic decline (ISTAT, 2010). The suburbs of Palmaro and CEP soon took on the characteristics of dormitory districts for those who had found work in the ascending mechanical and steel industry of Genoa. Nowadays Pra’ is a district composing the metropolitan area of Genoa, with about 20,000 inhabitants.

These urban and demographic transformations went hand in hand with the infrastructural metamorphosis of the territory. In 1956/1957 the construction of the new highway connecting Genoa and Savona began, the excavation works of which started in the area of Pra’.

The most lasting and impactful infrastructural intervention that changed Pra’ permanently, was the construction of a large container terminal. The decision of the Port Authority – taken without consulting the citizens – to expand the port infrastructure on the beach of Pra’ had a fundamental impact on the quality of life of citizens of Pra’. If until the sixties the overall quality of life had remained generally high and the district had a certain tourist vocation, the construction of the port had overturned the situation.

The construction of the port began in 1974 and lasted until 1993. During these two decades, ports experimented great changes, including a completion of the containerization process. This had consequences on the construction of the terminal – which was initially wrongly named with the name of the nearby town Voltri. The initial promise of thousands of new jobs could not be fulfilled, and the population found itself deprived of direct access to the sea. The beach, which had the important function of public space for the local community, disappeared and local inhabitants, perceived such industrial impact as threatening, also due to its extreme proximity to their houses. 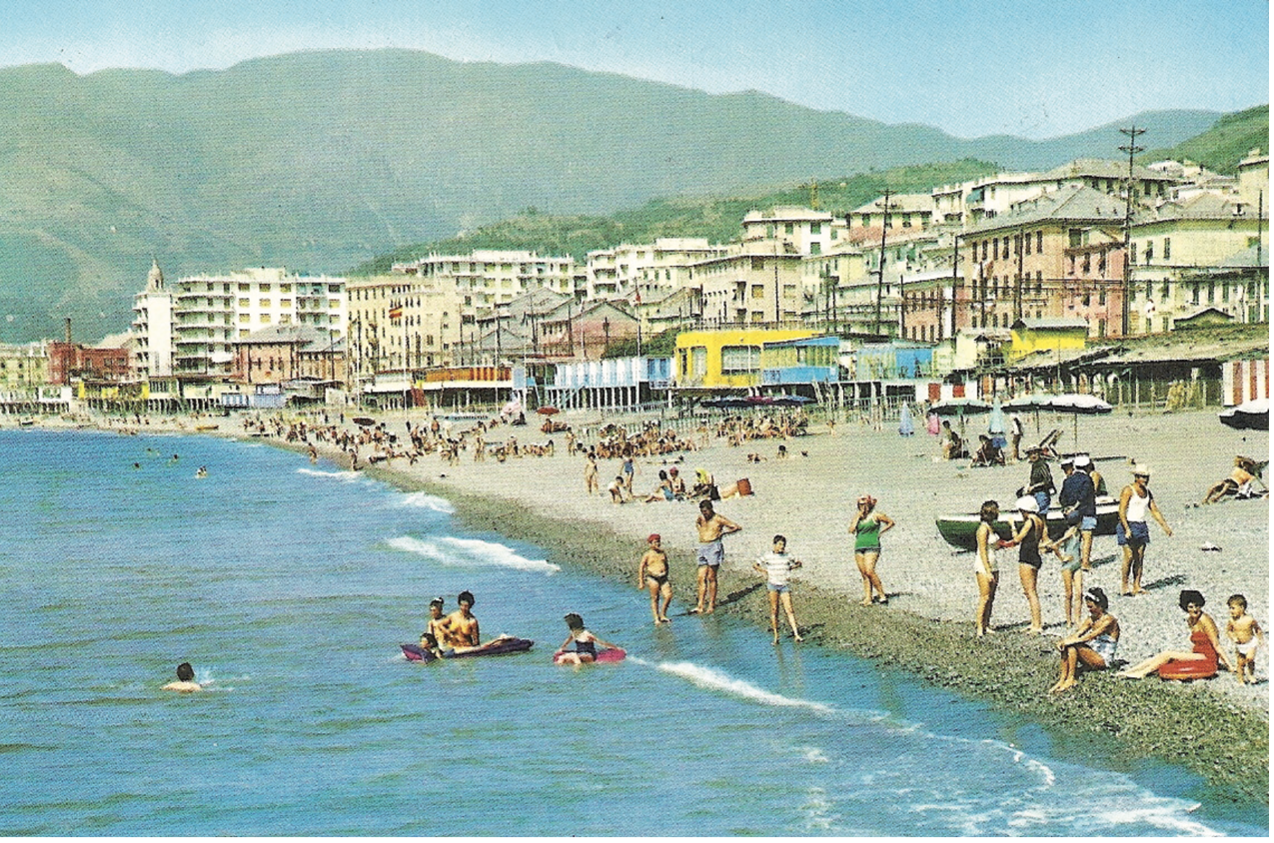 In the space of a generation, Pra’ has changed from a small rural center with a certain tourist vocation to an industrial suburb with several tens of thousands of inhabitants. The consumption of soil by infrastructure brought a continuous degradation of the local territory.

A first social response to such degradation by the local population came in the early 90s when the completion of the port platform of Pra’, threatened to erase the last stretch of water in front of the district that was separating the terminal from the residential area. In 1993 a damaging flood took place in the area, which is related to the construction of the port; in particular, the filling of the terminal’s platform had modified the functioning of local streams. This triggered an important social contestation. Citizens for the first time managed to obtain a change in the design of the port, in order to keep a water canal between the residential area and the container terminal, decreasing the risk of further floods.

Facing the preserved water channel a walk was created, while exploiting the part of the filling immediately in front of the neighborhood (about 50 meters wide) an urban park was created and the railway was removed from the vicinity of the urban center.

During the late 2000s, a series of demonstrations took place. Citizens were upset about the “invasivity” of the new infrastructure and the decline of their quality of life. Sonic and atmospheric pollution was a particular reason for complaint, as the adjacent port activity began to disrupt people’s daily life. 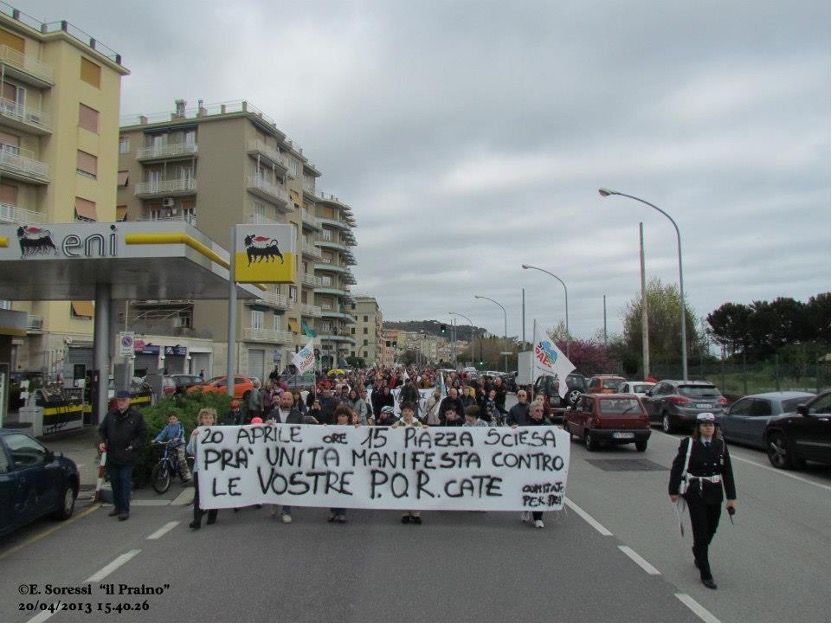 The creation of the PRimA’vera Foundation in April 2013 allow us to concentrate the energy of social discontent and canalize it into pragmatic proposals for mitigating the impacts of the port and related infrastructure. The foundation managed to open a channel of communication between citizens and institutions. This allowed the population to officially acquire a certain weight in the decisions that affect the territory we inhabit.

One of the early successes of the foundation was changing the name of the terminal from Voltri to Pra’. In more recent years, the foundation had an enormous role in promoting impact mitigation, collaborating with the University of Genoa. It ran a competition aimed at outlining a project of redevelopment of the last coastal stretch of the neighborhood in front of Palmaro. The western part of Pra’, occupied precisely by the district of Palmaro, is in fact the point where the port filling had already been completed in the early 90s, therefore in this place the requalification of the seafront could not take place as it happened elsewhere. Thanks to the Foundation, which was asked local inhabitants to vote for the best project among the four in the competition, it was possible for the Municipal Administration to nominate the project for a ministerial call, in order to obtain the necessary funds for the works. This initiative was successful and approved in the spring of 2021; it will allow the redevelopment of Palmaro, as well as some interventions in the popular district behind Pra’ (CEP) for a total amount of 30 million EUR.

The events of the last few years are making the role of the Foundation ever more relevant for the redevelopment of the territory, acting as a hinge between the population of the neighborhood and the municipal and port Institutions.

The effort of the foundation in bringing together all the urban realities that make up contemporary Pra’ is indisputable. Its effort to elaborate projects that include urban areas hitherto forgotten by the Public Administration will hopefully lead to a rapprochement not only urban but also social, of the different souls that compose Pra’. 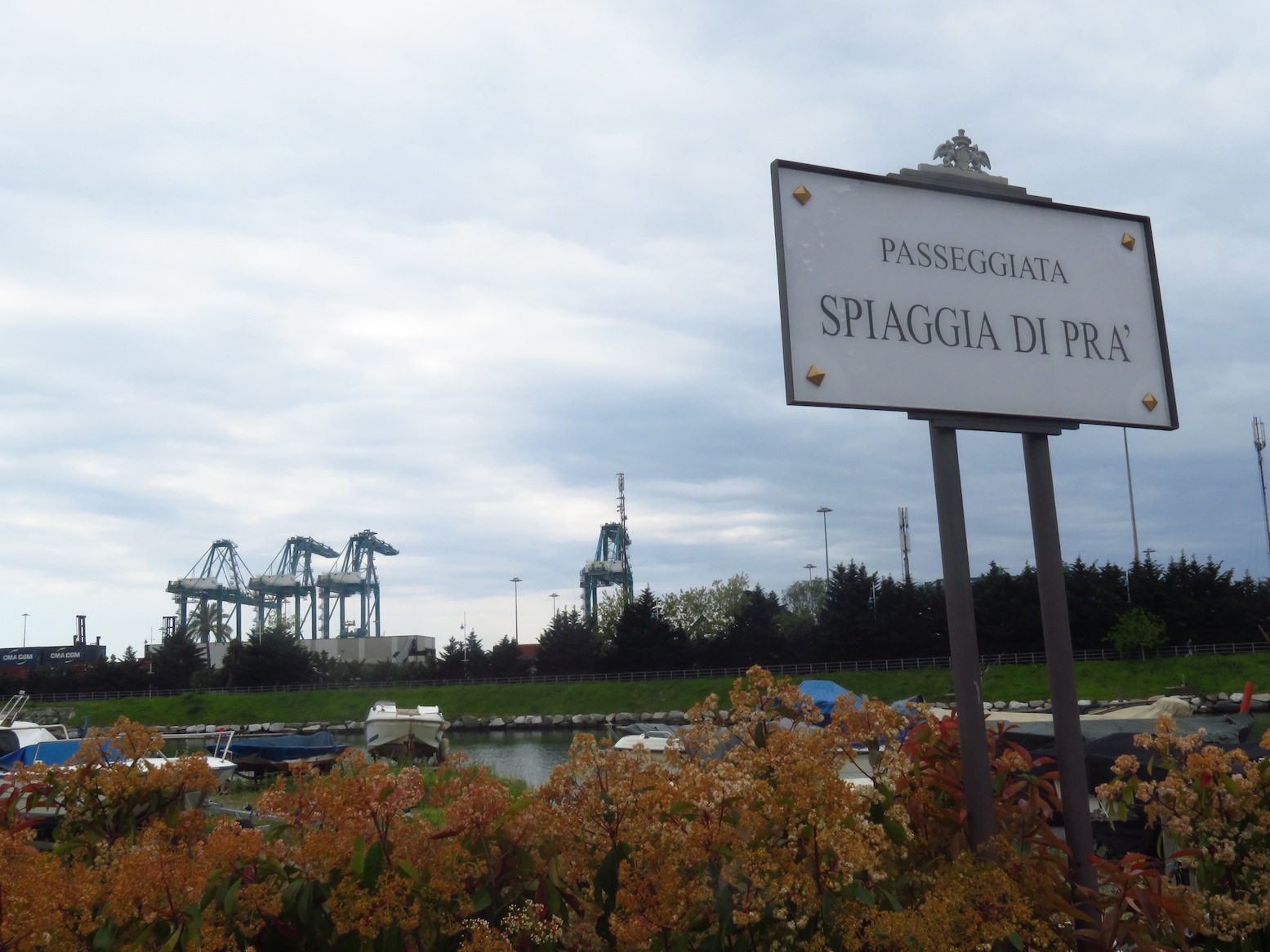 Davide Siviero is a resident of Pra’.

Read more about the struggle of Pra’ in Community Actions