Collective monitoring of port transformations. The Observatory of Piraiki-Piraeus, and other community actions of resistance.

The first step of COSCO in the construction of the cruise terminal was on 31 March 2020, when it sunk buoys in the sea of Piraiki, one of the municipalities of Piraeus. The country was in lockdown and people were scared of Covid-19. Citizens of Piraeus reacted strongly on social media to the works started by COSCO, sharing pictures and videos of the construction works taken from their windows. The ships were dropping toxic material in the sea.We made posters and flyers to invite other citizens around the port to contribute to monitoring and to collect testimonials. The Observatory of Piraiki-Piraeus was born as a spontaneous and collective method to monitor the environmental damage related to port construction.

Photos were taken from many locations around the port: Elefsina, Salamis, Drapetsona, etc. Citizens were documenting changes in the landscape. Right now the observatory also counts on a small boat that is sent out to spot any illegal dredging happening in the sea. 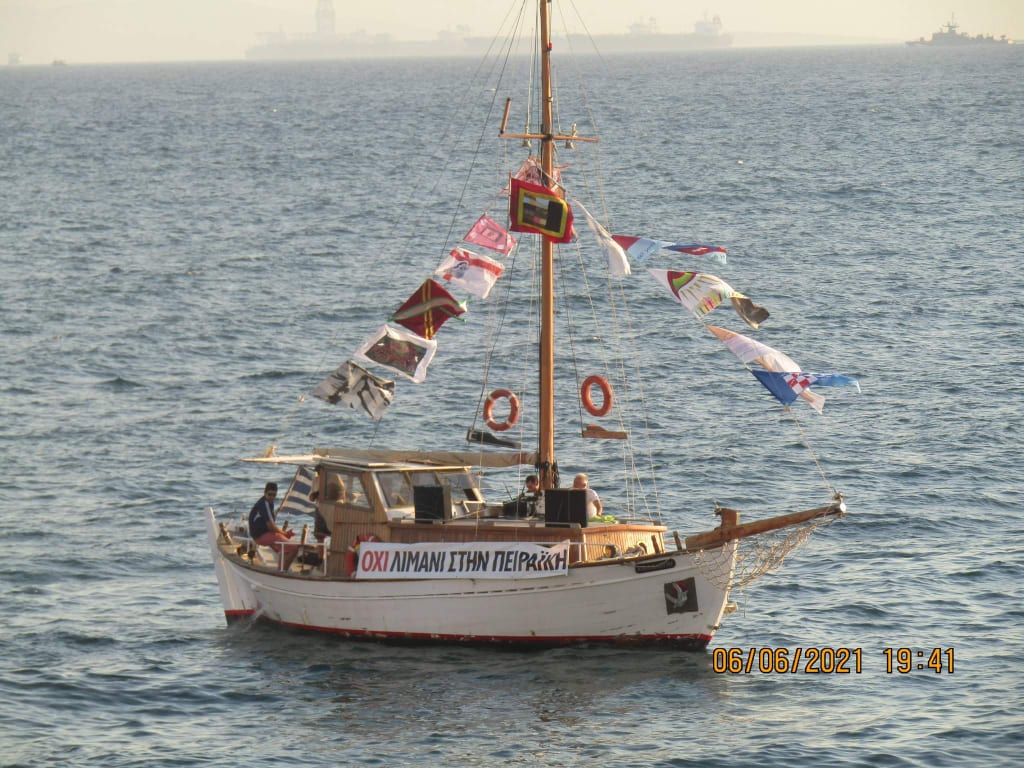 The observatory obtained the support of Tselentis Vassilis, a great professor of the University of Piraeus, working on environmental monitoring in maritime environments. Thanks to the observatory, we have enough evidence for solid scientific work about the environmental damages caused by port construction. Now we are about to transform the Observatory into a non-profit for the study and protection of public health, environment and climate.

During lockdown, we also organised public action, and made an outdoor installation with childrens’ paintings about their perceptions of the port’s impacts. The paintings were fixed on the trees along the seaside road of Piraiki, but the police came and destroyed them. But after we made them again.

In 2020 we also won in court, obtaining a temporary restriction to halt dredging operations. We also organised marches, such as the one for the protection of the monuments the Tomb of Themistokles and the Kononion wall.

Read more about the contestation at the Port of Piraeus.