The Llobregat delta: defending biodiversity from the expansion of the port and airport of Barcelona

An extract from the interview with José García from DEPANA –League for the Defense of the Natural Heritage. The interview was conducted in November 2021 by Marta Catalán

For 40 years, DEPANA has been fighting to defend the natural heritage of Catalonia. This has included the Llobregat delta, a territory of high biodiversity squeezed between a large port and a large airport right next to the city of Barcelona. In early summer  2021, DEPANA was in the eye of a storm. A dispute between the airport authorities – who wanted to extend a runway into the protected zone of the Llobregat delta – and the European Commission – who complained that the protection of Llobregat’s natural areas had been insufficiently followed up – reached international headlines. The news opened up the decades-long conflict between those arguing for man-made infrastructural development and those defending natural spaces in this territory.

This interview with José García from DEPANA [Lliga per a la Defensa del Patrimoni Natural (League for the Defense of the Natural Heritage) about the conflict was conducted on 11 November, 2021.

Marta Catalán: How has the Llobregat delta been affected by the development of the port and the airport of Barcelona?

José García: The Llobregat Delta is included in the metropolitan area of Barcelona, of almost 5 million inhabitants. Historically the entire delta has been seen as an area to build services and infrastructures linked to the metropolis. These infrastructures have been built significantly affecting existing natural and agricultural areas. This has also happened to the wetlands, which act as a buffer between urban areas or infrastructures and that serve as a cushion to protect them.

JG: Natura 2000 Network is an internal network at European level of natural areas incorporated into the implementation of the Birds Directive and the Habitats Directive. In the particular case of the Llobregat delta, different extensions have so far been incorporated: just over 900 hectares that are under European guidelines, most of which have already been transposed into domestic legislation through the Biodiversity Act of 2007. In particular, the Llobregat delta has been incorporated into this international Natura Network for various reasons, but mainly because of its ornithological values.

We should bear in mind that the Llobregat Delta is located next to the Mediterranean on a north-south migratory route that connects wetlands such as the Albufera in Valencia and the Ebro delta, with areas further north, such as the Empordá, or even the Rhone. And it is a very important route that birds take during both the periods that they spend in Africa and on their way to Europe, since many have the obligation to pass through here. This gives special relevance, because even if the land was small, it is, so to speak, a very important gas station for refueling. And its disappearance could affect the entire migratory route.

In addition, the Llobregat Delta, although it is a reduced area, it has a high diversity of different habitats which confers it a special value and which has been recognized by inclusion in the Habitats Directive within the space of Natura 2000 Network. In regards to the biodiversity, if we compare it, for example, with the Ebro delta, or the Empordá, which are the closest, the Llobregat delta is very relevant in the sense that in a very reduced space you find many different habitats. In other wetlands there are large habitats in large areas, but we would say per hectare you do not have the diversity of species and habitats that you can find in the Llobregat delta. Moreover, the fact that it is within a metropolis such as Barcelona speaks of the relevance of its pedagogical value.

MC:  What are the measures that DEPANA proposes to protect these spaces?

JG: DEPANA makes fundamentally two major proposals. The first is the expansion of protected areas that are consistent with the delimitation of the current IBA (Important Bird and Biodiversity Areas) of the Llobregat delta. The Delta covers 3700 hectares, so the current 900 of the IBA are manifestly insufficient. That is not to say that all areas that are incorporated have to be or become humid areas. DEPANA proposes to incorporate areas such as the Llobregat river, where we suggest rather than a change of use, an improvement of its current conditions.
The second proposal is a management plan. When we aim to incorporate the agricultural areas is to maintain a type or model of management, so to speak, more traditional and not intensive.
We propose a management plan that incorporates urban planning measures, as well as medium and long-term plans for the management of species and spaces. Moreover, there is one thing that is fundamental, which is the incorporation of a budget. Over the past few years, budgets have been between very small and nil. There have been many years that the Generalitat [the Catalonian government] has not given a euro to the Consortium for the Management of Natural Spaces. 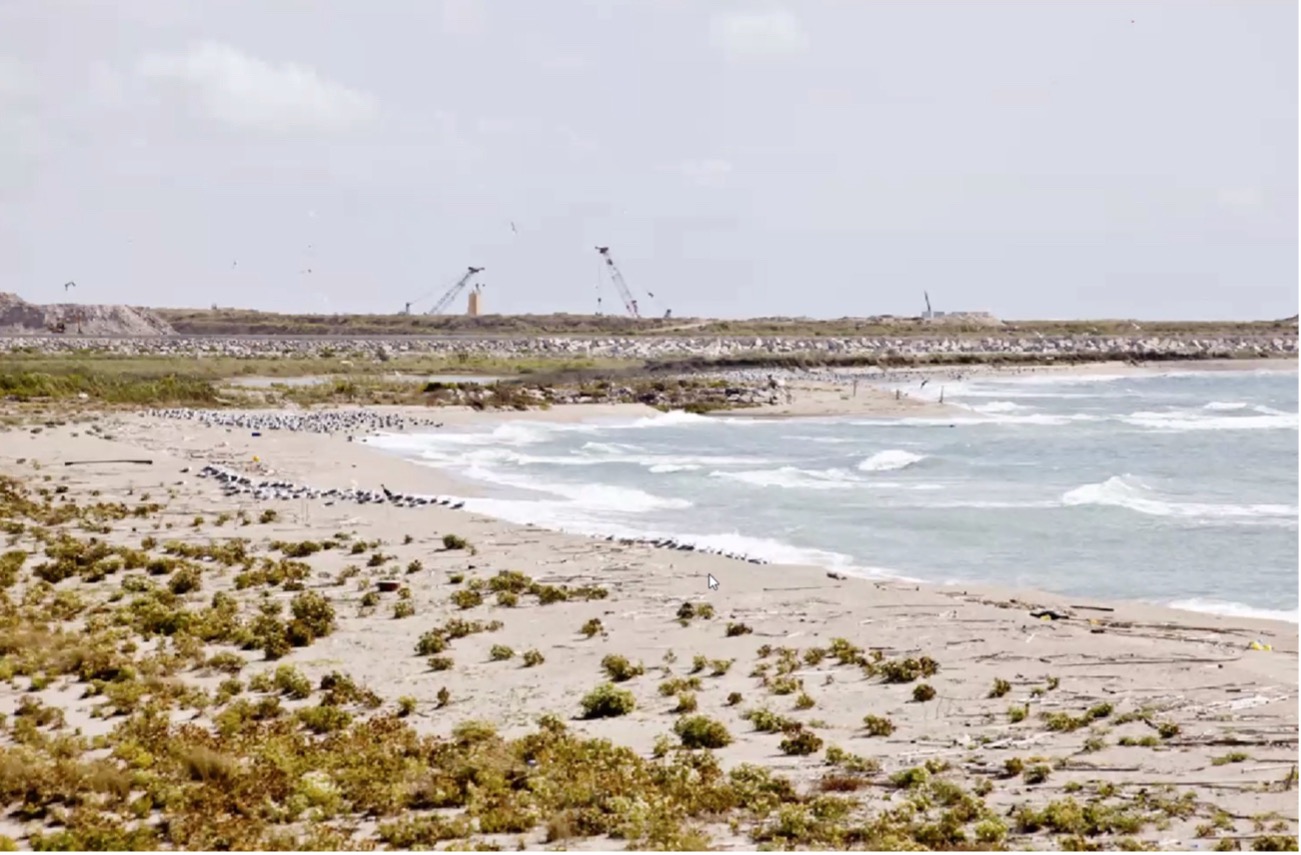 The new seashore in the Llobregat delta after the river diversion. BEST port terminal cranes in the back. Photo by Manuel Carvajal.
MC:  Is there any way to reach a halfway point between the infrastructure development proposals and the proposals made by DEPANA to continue protecting the current natural spaces?
JG: In regards to reconciling actions fundamentally with the Barcelona airport or other infrastructures in relation to the protection of the Delta, we have to get back to what the European Commission itself says, and that is that the first thing to do is to correct the impacts or performances that were once wrongly done. You cannot go to the European Commission to ask for permission to take new actions that may have negative effects on the Llobregat Delta when you have not corrected what should have done years ago. The first thing is to comply with the given word. And from there, you can propose new actions.
Other administrations and entities such as the City Council of El Prat support us. The actions carried out at Barcelona airport must be limited to what is the territorial framework that they currently have. The airport can no longer grow outside the airport.

MC: What have been the institutions, administrations and groups with which DEPANA has been working or has approached to try to solve all these problems?

JG: Fundamentally and in the long term, it has been with SEO BirdLife International, the promoter of the IBAs. SEO BirdLife is an entity that at the state level with the European Commission, it has knowledge of how the dynamics work and while we have filed the complaint ourselves, SEO BirdLife has helped us a lot along the way. In regards to the administrations, we have been in touch fundamentally with the Generalitat and with the Department of Sustainability (named Agriculture a few years ago; Agriculture then passed into Territory and is now back to Agriculture).

While the political parties have shifted, we have maintained contact with the technicians involved in these issues. However, technicians have little to say in the final decisions, which relies largely on the politicians. Also, we have kept in touch with the rest of the administrations, including the Port Authority and the City Councils of Barcelona and El Prat, with whom we have organized meetings over time. We have kept our differences, but with contact, which has absolutely not happened with the airport, with whom we have had no contact at all.

MC: What have been the responses that you have seen from administrations, institutions or groups in relation to the protected spaces as a result of the warning issued by the European Union?

JG: Well, basically all of this comes from the summons sent in February of the year 2021. The letter divided responsibilities or requests into two groups. One was intended for the Generalitat and the other to the Spanish Central Government, which was closely related to the previous expansion of the airport.

As part of the responsibilities that the Generalitat has for this, the action that it is developing right now is the extension of the protected area. We have been working on this extension for a long time with technicians and political leaders. And this does seem to be undergoing a process of evolution and development that will see the light in the coming months. According to them, before the end of 2021 or the beginning of 2022, the public processing of what is the new extension would begin, which would at least double the currently protected areas [as of July 2022, this process has not started yet]. Yet, we are not so much interested in quantity, but rather in quality, which is what will be determined in the near future. Also, there is the commitment that over the next year we will start processing a special plan that will include the management and urban regulations of the new delimited areas.

From the Spanish central government’s response, which I suppose was MITECO [Ministerio para la Transición Ecologica y el Reto Demográfico (Ministry of Ecological Transition and Demographic Challenge)] as responsible for the environment, we do not have much knowledge and in view of what we see about the territory, there has been no movement. The most significant and most visible complaint was the taxi stand over the protected area of Can Sabadell. Taxis were taken out, of course, but the area has been urbanized and no action is being taken to revert the area to its previous state, so to speak. So, well, we have little awareness of what it is, now not so much the response of the central government, but the response of the European Commission to the non-response by the central government.

Marta Catalán is an architect and urban designer (PhD). Her research examines urban segregation, unequal living conditions, and gentrification, with a particular interest in transnational architectural and urban forms and norms.